The Cyber Risk Index 2020 with a global focus

The Cyber Risk Index (CRI), launched three years ago by Trend Micro in conjunction with the independent Ponemon Institute, has received a new global version. This year, Europe and Asia-Pacific have been added to the survey, meaning the risk index now offers a global view of the cyber risks that businesses need to cope with.

For the CRI, IT managers from companies of all sizes are surveyed to help determine the level of risk for organisations. It looks at two areas:

The ability of companies to prepare for attacks against them (Cyber Preparedness Index) and
The current assessment of threats targeting them (Cyber Threat Index).
These two indices are used to calculate the overall cyber risk for a company. The basis is a scale from -10 to +10, with negative values indicating a higher risk level.

Of the three main regions, the US has the highest risk level compared to Europe and Asia-Pacific. A closer look at the details shows that cyber preparedness is lowest in the US, which has led to the CRI being the highest overall. Surprisingly, the Cyber Threat Index was about the same in all three regions. 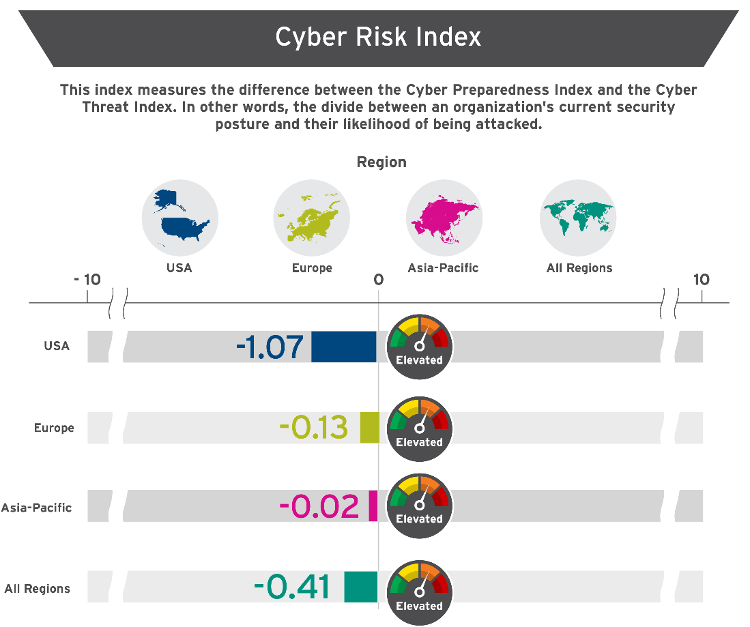 In essence, this means that companies in the US were reportedly the least prepared to effectively stop or respond to cyber threats. Since companies in all three regions appear to face threats to the same degree, the US thus had the highest CRI score overall.

The details of the results

The results also reveal the areas of greatest concern across all regions:

For example, security researchers have produced the CRI three times now for the US, and it has remained consistent, 5.22 for 2018, 5.5 for 2019 and 5.22 for 2020, meaning that the areas that can move the CRI from a negative to a positive (less risk) score are in preparedness.

The following areas of preparedness still need the most work to address the greatest risks:

The CRI is an ongoing project that is updated every year to show trends in attack preparedness. Interested parties can also use the website to check the CRI against the current results for their organisation: www.trendmicro.com/cyberrisk.

In addition, there is the graphical summary of the CRI.